Hester Berry’s 2nd Solo Exhibition with the New Ashgate Gallery.
This show is a retrospective of work produced in the past year. It includes simple landscapes, areas of the countryside at moments which have struck Hester and required reflection, instants which demanded her attention and deserved to be immortalized. Most of these are Sussex and Surrey, areas where Hester has lived and explored extensively.

It also includes extracts from previous and current projects:
– Investigations into the use of different materials, with an aim to be less harmful, less wasteful and more resourceful.
– Snippets from a show called ‘Horizons’ which predicted the visual effects of planned wind turbines in North Devon
– Meditations on the convoluted nature of modern life, manifested as detailed rubbish tips. These fantastical landfills consist of irritating irrelevances and minutiae, playful and rude nudges at big companies and well known figures, illustrations of current affairs, references to art literature and music which had inspired her, and finally, realistic bits of rubbish! 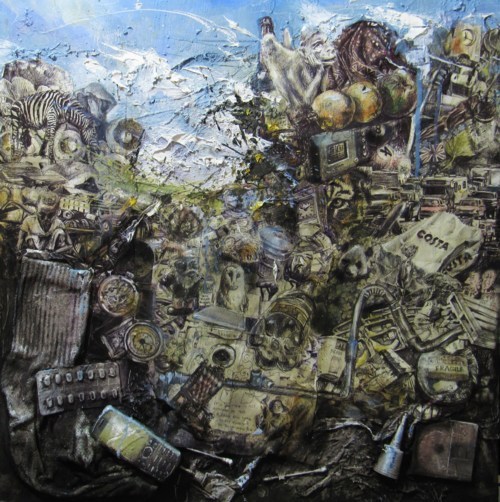